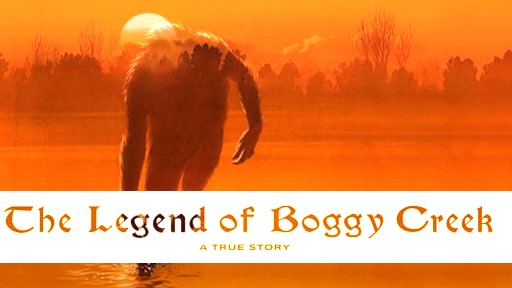 On Sat, Oct 24 at 8:00 PM Circle Cinema present LEGEND OF BOGGY CREEK (1972). The event will set up in the back parking lot off Admiral and Gillette. Film will be shown on Circle Cinema’s new 20’ outdoor screen. Safety info below.

THE LEGEND OF BOGGY CREEK. After literally decades of bootleg copies (now all removed from everywhere after a lot of legal work), the Fouke Monster is back. The new 4K restoration by George Eastman House brings back one the biggest indie films of all times and probably the only G rated horror film.

Shot in and around Fouke Arkansas with local actors (and mostly non actors including whole lot of high school students), maverick writer/producer Charles B Pierce (The Town That Dreaded Sundown) created a national sensation with his then unique mix of documentary style and fiction to tell the story of the Fouke Monster a Bigfoot like creature that had been sighted by locals for decades. THE LEGEND OF BOGGY CREEK was a huge hit that bypassed Hollywood distribution, but went on to become the 10th Highest grossing film of 1972. Sadly years of legal fights, neglect and a whole lot of bootlegs led to it basically being around in crappy copies with no theatrical rights at all. After premiering the restoration to sold out shows last June in the Perot theater in Texarkana TX where it originally premiered, ( and that had to be retrofitted as it no longer a movie theater) the 4K restoration played one off shows as well as short runs around the country that Charles Piece’s daughter Pamula has booked .THE LEGEND OF BOGGY CREEK is both beloved by people who remember it’s original release and discovering a whole new audience from hipsters to parents taking kids to a film they remember scaring them as kids.

Safety: Presenting films in this setting will ensure social distancing guidelines are adhered to while you and friends enjoy movies on the big screen. The concession stand with Tulsa’s best popcorn will be open! – FACE MASK REQUIRED – More on Circle Cinema safety precautions here! – https://www.circlecinema.org/portfolio/circle-cinema-set-to-reopen-friday-6-26-please-see-video/