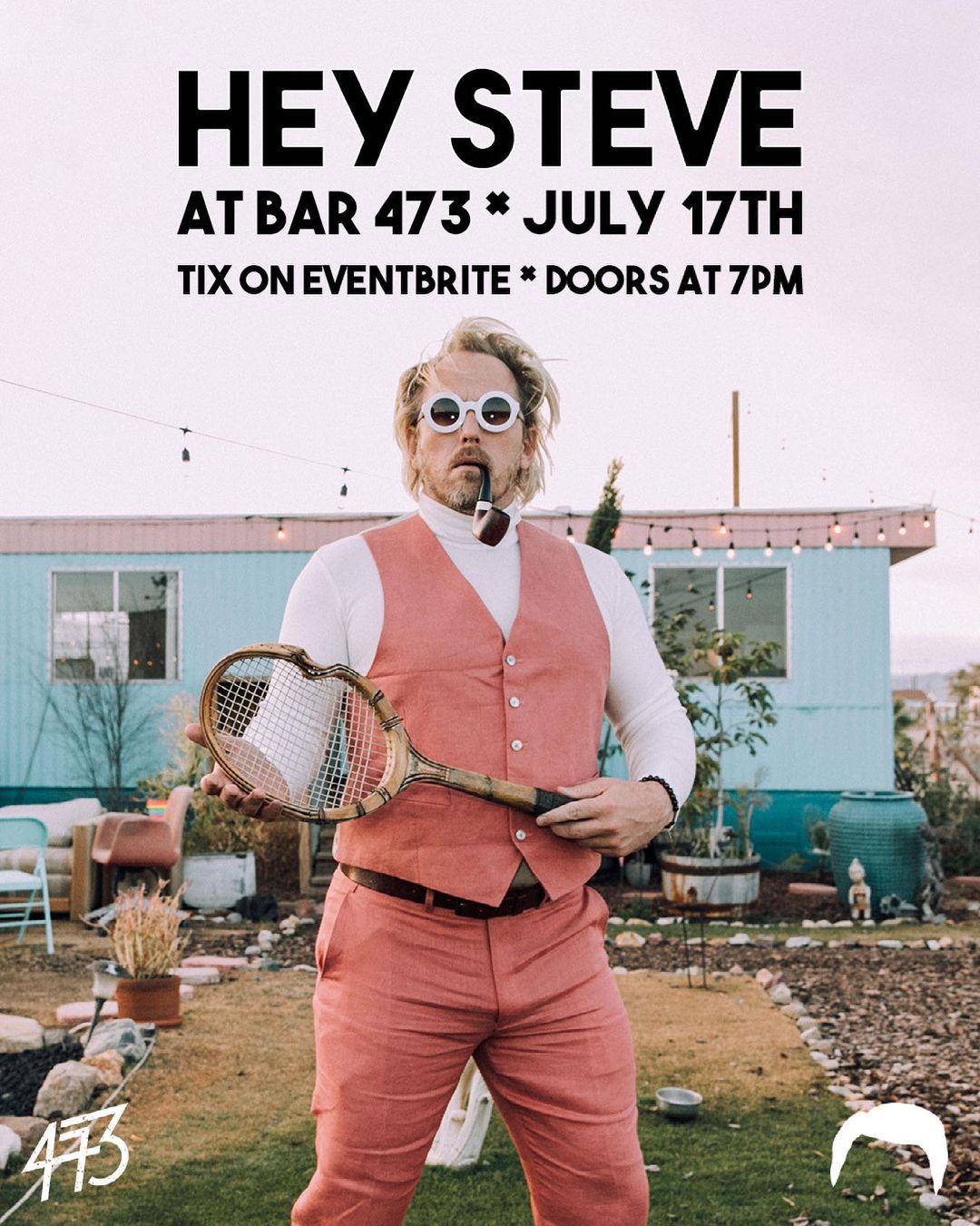 HEY STEVE Live on the 473 Stage in Tulsa, Oklahoma! July 17th * Doors at 7pm * 21+ Only
HEY STEVE
New wave punk band Hey Steve taps the flamboyant musicality of The Cars, Devo, The Clash, and The Talking Heads, and tosses it into a blender with the dark satire of Kurt Vonnegut and the wry observational wit of David Sedaris. Within a narrative context, the band waxes absurd and poetic about the apocalypse, courtship rituals, and manners, among other things.
Hey Steve is the brainchild of Luke Dick, an Oklahoma born, Nashville based songsmith who has penned hits for the likes of Eric Church, Miranda Lambert, Kacey Musgraves and Dierks Bentley. The band’s 2018 summer “anti-war ditty” “Fuck a Bomb” delivers its rebellious message in a way that only Hey Steve could conjure – “Fuck a bomb, drop a single,” a tongue-in-cheek call- to-arms that landed the band on Spotify’s Rock This playlist (4.5 MILLION followers). It’s just another example of the band’s quirky lyrics and outside-the-box compositions that have already garnered admiration from outlets like NPR, who’s Ann Powers invited Hey Steve in for a World Cafe Nashville Session and states “Dick has a strong voice and vision in his own right, and it manifests in stories more creative — and funnier — than what Music Row usually offers,” and Rolling Stone Country who featured Dick with an in depth interview, calling Hey Steve Dick’s “irreverent Nashville punk band” and adding that “Dick is a something of an anomaly in the Nashville songwriting community.”
2020 kicked off with the release of Dick’s first feature-length documentary film Red Dog, which he co-directed, co-produced and scored. The film revisits his childhood, growing up at the infamous strip club where his mother danced in Oklahoma City. After premiering at film festivals across the country, Red Dog reached #5 on the iTunes documentary chart.
Hot on the heels of his debut as a filmmaker, Dick released Hey Steve’s sophomore EP in February 2020. “Steve by Steve” is a danceable satirical analysis of American modernity in the age of Bitcoin, astrology, and Instagram stalking. As quarantine descended on Hey Steve, they continued to create, releasing the single “Do the Apocalypse” and later their third EP “Guru Steve” in which he collaborated with Patrick Carney on its title track “Guru.”
+ Google Calendar+ iCal Export