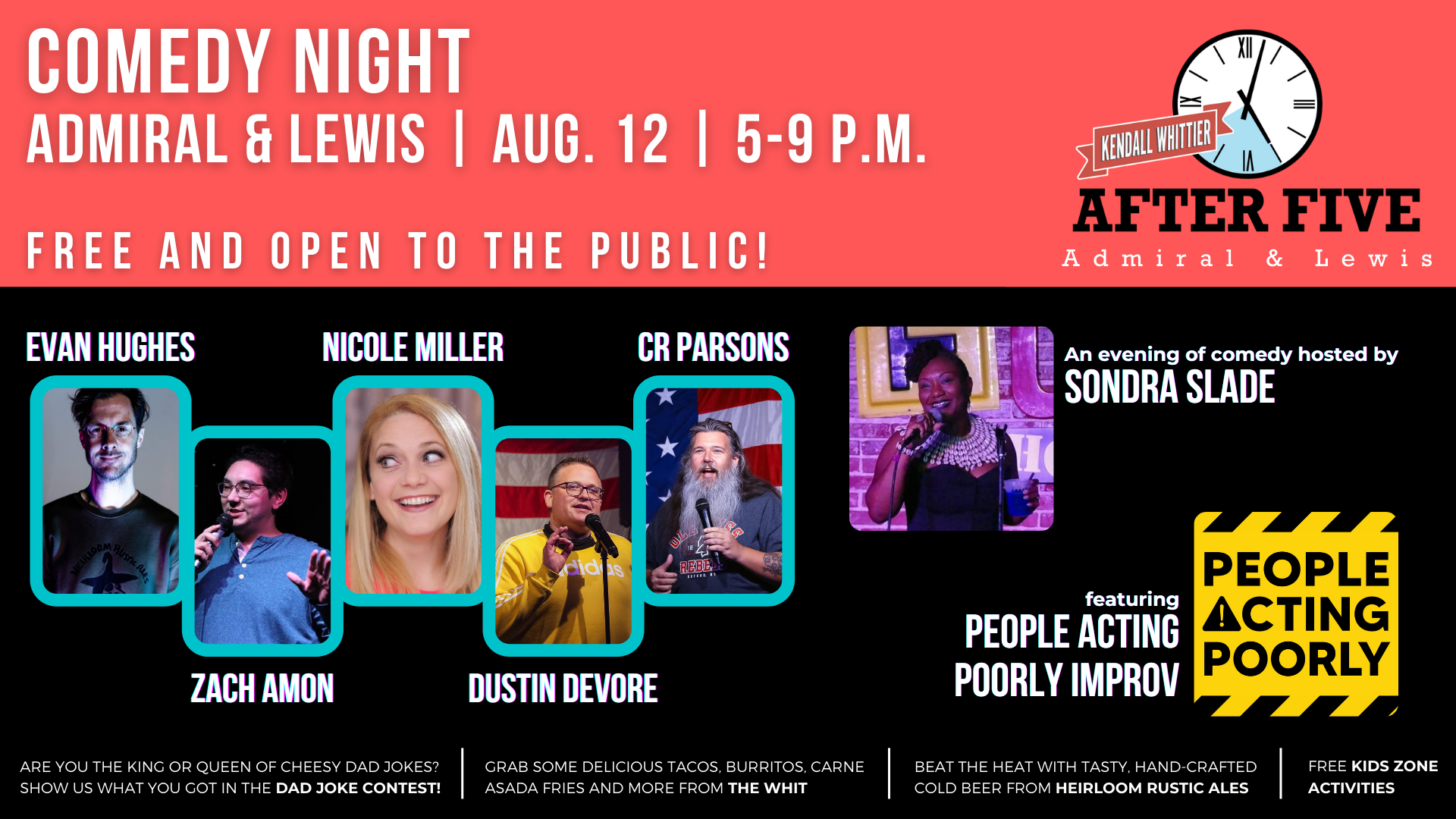 At the Comedy Convention, there were riddles and knock-knocks jokes. But no puns attended.

All puns will be intended and all knock-knock jokes answered at August’s Kendall Whittier After Five – Comedy Night on Aug. 12. The night of comedy, which features multiple comedians, an improv group and a dad joke contest, is emceed by Sondra Slade.

“It’s going to be exciting having so many entertainers at Comedy Night, all with different styles,” said Sydney Alison, community engagement coordinator of Kendall Whittier Main Street. “There’s something for everyone!”

The jokes kick off with People Acting Poorly Improv at 6 p.m., followed by a Dad Joke Contest at 7:10 p.m. before the night rounds out with Evan Hughes and SoundsTooth comedians Zach Amon, Nicole Miller, Dustin DeVore and CR Parsons. The event ends at 9 p.m. [See Facebook event!]

“As always, Kendall Whittier After Five is still a family-friendly event,” said Jessica Jackson Seay, executive director of Kendall Whittier Main Street. “We have a free Kids Zone, and the comedians know to tell jokes appropriate for all ages.”

Anyone can enter the Dad Joke Contest, but prior registration is required. [Sign Up Here] Contestants will be allowed to tell up to 5 Dad Jokes during their “set.” Audience members will select a winner with a “vote with your dollars” fundraiser for the San Miguel Middle School Supply Drive. The winner will receive half the total proceeds raised plus a “Best Dad Jokes” trophy.

“Dad Jokes have us rolling on the floor at the office,” said Jessica Jackson Seay, executive director of Kendall Whittier Main Street. “I can’t wait to hear the quality of Dad Jokes entering the contest!”

On the second Thursday of every month for After Five, volunteers lay 2,400 square feet of astroturf, creating a “pop up park” in the Whittier Square parking lot at the corner of Admiral and Lewis. The event is free and open to the public.

The pop up park provides a place for attendees to sit and enjoy the entertainment. Guests are encouraged to bring their own lawn chairs or blankets but some chairs will be provided.

Heirloom Rustic Ales will be selling beer selections at the event, while The Whit Food Truck will offer up delicious bites all night. Additionally, Pollos Asados al Carbon, a food truck behind She Brews Coffee House, will be open. Food and alcohol are the only things at After Five that cost money.

A special “Friends” VIP access tent will be on site for Friends of Kendall Whittier, with complementary beverages available.

Other After Five events this year include: Salsa Night (September 9) and TU Night (October 14).

After Five is made possible through a sponsorship by Fowler Automotive.

Kendall Whittier Main Street is a nonprofit organization that inspires the ongoing revitalization and growth of a historic and cultural neighborhood in Tulsa, striving to transform it back to a thriving, walkable commercial district. KWMS is a 2020 Great American Main Street Award winner and an Oklahoma Certified Cultural District.

For more information about the Kendall Whittier Main Street, please call or text 918-633-1934 or email info@visitkendallwhittier.com.