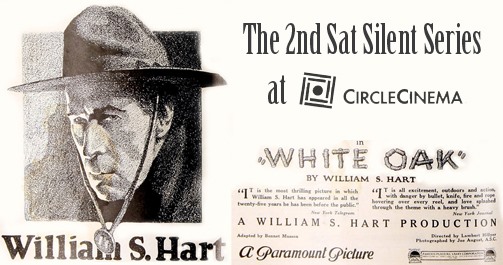 The 2nd Sat Silent Series will remain Virtual Screenings for the rest of 2020. Join us through Circle Cinema’s Youtube Page for a FREE screening of this 1921 western with an original score played by Bill Rowland on Circle’s restored 1928 theatre pipe organ.

William S. Hart, one of Hollywood’s first cowboy stars, plays a gambler out for revenge after his sister has been wronged.

Fun Facts: A storybook hero, the original screen cowboy, ever forthright and honest, even when (as was often the case) he played a villain, William S. Hart lived for a while in the Dakota Territory, then worked as a postal clerk in New York City. In 1888 he began to study acting. In 1899 he created the role of Messala in “Ben-Hur”, and received excellent reviews for his lead part in “The Virginian” (1907). His first film was a two-reeler, His Hour of Manhood (1914). In 1915 he signed a contract with Thomas H. Ince and joined Ince’s Triangle Film Company. Two years later he followed Ince to Famous Players-Lasky and received a very lucrative contract from Adolph Zukor. His career began to dwindle in the early 1920s due to the publicity surrounding a paternity suit against him, which was eventually dismissed. He made his last film, Tumbleweeds (1925), for United Artists and retired to a ranch in Newhall, CA. By that time audiences were more interested in the antics of a Tom Mix or Hoot Gibson than the Victorian moralizing of Hart. He is buried in Greenwood Cemetery, NY.