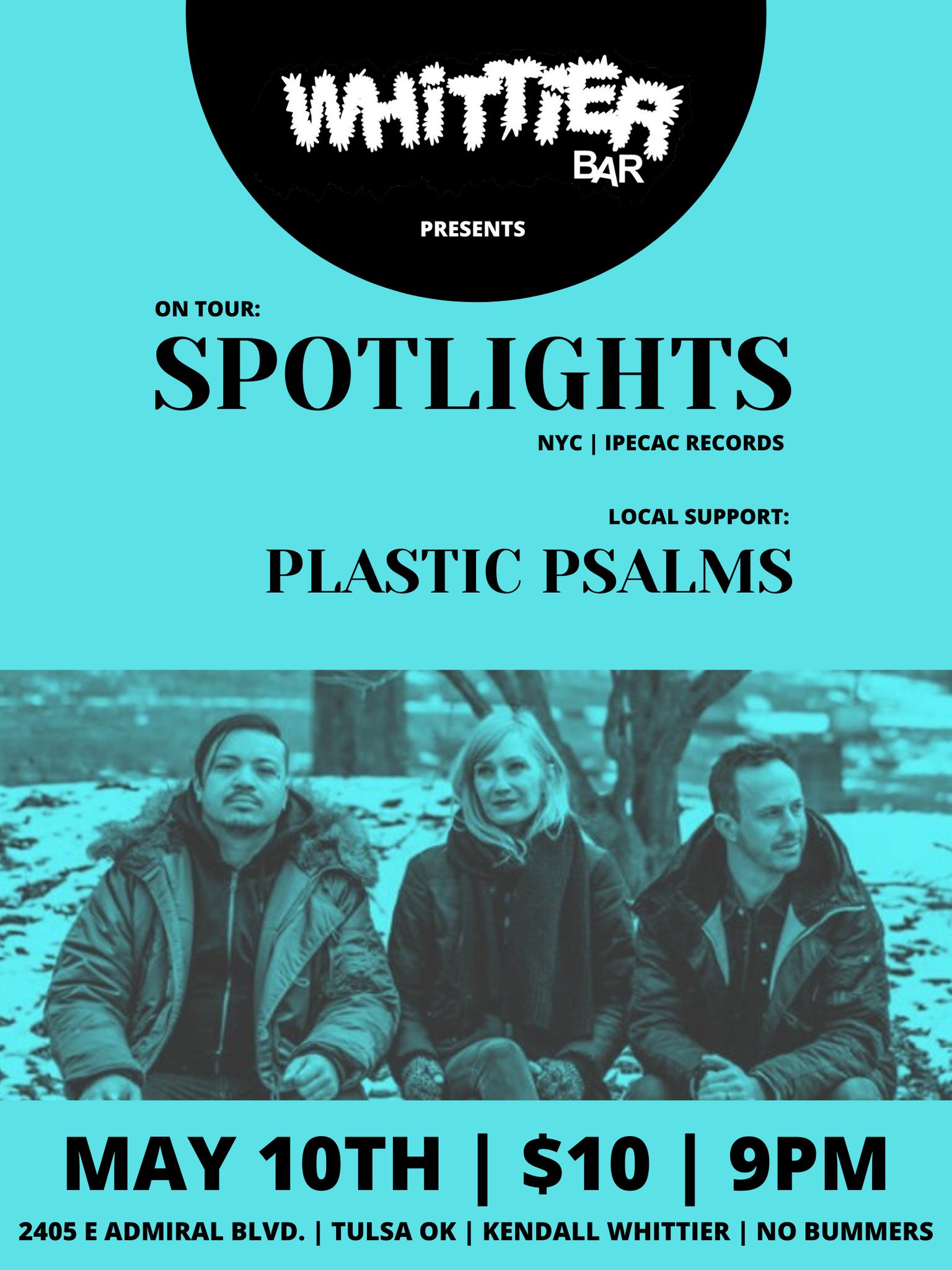 Spotlights | Live at the Whittier Bar
It happens void of spectacle, show, or tableau. However, in this day and age, that might be why the story of Spotlights feels so serendipitous and strange, if not utterly surprising. This story also instantly appealed to some rather influential peers who lent an early endorsement. Two musicians—husband-and-wife duo Mario [guitar, synths, vocals] and Sarah Quintero [bass, guitar, vocals]—simply pick up their instruments and mainline dense distortion, spacey soundscapes, and unnervingly serene vocal transmissions directly from the heart.
This unpredictable, yet unassuming sound quietly heralded their arrival in 2016 on the D.I.Y. debut LP, Tidals. Brooklyn Vegan stumbled upon the project and streamed “Walls.” The song eventually entranced musician and producer Aaron Harris (ISIS/Palms) who shared it with his Palms singer and Deftones frontman Chino Moreno. An invite to open the Deftones summer tour followed as the band would go on to share the stage with everyone from Melvins, Quicksand, Hum, and Glassjaw to Pelican and Pallbearer. Ipecac Recordings co-founders Mike Patton and Greg Werckman fell under the band’s spell and signed them. The Harris-produced Seismic dropped on Ipecac Recordings in 2017 to acclaim from Revolver, Metal Injection, New Noise, MetalSucks, and many others. Between tours, 2018 saw them reveal the Hanging By Faith remix EP and one-off single “Kiss the Ring” [feat. Allen Epley].
Mario may be able to explain how it all happened, but the “why” still eludes him…
“Three years ago, we were just playing tiny local shows, and all of these crazy things have happened since,” he smiles. “It’s an interesting story to us, because we’ve never had a gimmick or a hook. What sets us apart is the music. We try to bring different worlds together in a way that’s as original as possible. We know the specifics of how it happened, but we don’t really know why.”
The group’s 2019 third full-length, Love and Decay, may indirectly offer an answer. This time around, Spotlights once again personally handled production, working out of a tiny Brooklyn rehearsal space. However, for the first time, they enlisted the talents of drummer Chris Enriquez behind the kit on the entire body of work rather than a combination of Mario and guest performers.
Sonically, the group further canvased new territory. Whether it be the hummable guitar lead peeking through trudging grooves on “Until The Bleeding Stops” or the ghostly pop chorus of “Particle Noise,” they ascend to a tipping point between volumetric riffing and blissful melodies. “Xerox” bears a sense of delicate intimacy within the delivery. Meanwhile, the first single “The Age of Decay” crescendos towards an emotionally charged harmony colored by shimmering keys and bright guitars before off-kilter riffs seesaw back-and-forth on the bridge.
“‘The Age of Decay’ encapsulates everything we do on this record,” continues Mario. “It’s got some of the heaviest moments as well as the most dynamic and melodic. It shows little bits of what we get into throughout the whole album in one track. It’s a love story in this age of decay. There are some personal points connected to our relationship about how things grew from when we met. We moved around the country and chased this thing together we’ve been chasing our whole lives. Meanwhile, it’s also about being in a world that can be fucking hard to deal with. It’s a broad stroke. It’s not just a picture of darkness and decay, but love.”
In the end, Spotlights paint such a picture on their own terms and without template or form.
“It’s intangible,” Mario leaves off. “It’s intense. It’s beautiful. There’s an impending darkness underneath everything and a sense of unease, but it’s also honest and vulnerable. It’s just really important to us. Regardless of why anyone might react, that’s why we do it.”
https://spotlights.bandcamp.com/
https://www.youtube.com/watch?v=eS4hKYOhqe0