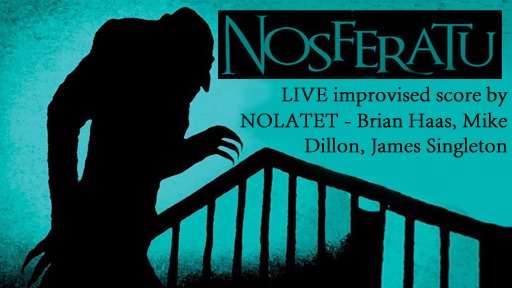 Fri. Oct. 30 & Sat. Oct. 31 the non-profit Circle Cinema presents NOSFERATU (1922) with a live, improvised score by world renowned musicians Brian Haas, Mike Dillon and James Singleton plus special guests. Seating at 7:30 PM and begins at 8:00 PM. The event will set up in the back parking lot off Admiral and Gillette. Film will be shown on our new 20’ outdoor screen.

About the film:
One of the silent era’s most influential masterpieces, Nosferatu’s eerie, gothic feel — and a chilling performance from Max Schreck as the vampire — set the template for the horror films that followed.

In this highly influential silent horror film, the mysterious Count Orlok (Max Schreck) summons Thomas Hutter (Gustav von Wangenheim) to his remote Transylvanian castle in the mountains. The eerie Orlok seeks to buy a house near Hutter and his wife, Ellen (Greta Schroeder). After Orlok reveals his vampire nature, Hutter struggles to escape the castle, knowing that Ellen is in grave danger. Meanwhile Orlok’s servant, Knock (Alexander Granach), prepares for his master to arrive at his new home.

About musicians:
Brian Haas is an award-winning pianist, composer, producer and arranger. He graduated from the University of Tulsa in 1996 with a Bachelor of Arts in Music. While at TU, he founded Jacob Fred Jazz Odyssey. In the last 24 years JFJO has released 27 albums, toured Europe and the Americas on a constant loop, played many of the world’s biggest music festivals, received the Guinness Cork Award in Ireland and sold out prestigious U.S. clubs like Yoshi’s and The Blue Note. The last 3 years have seen Haas touring, composing and recording with Matt Chamberlain (drummer for Tori Amos, Fiona Apple, Soundgarden, Pearl Jam) and The Nolatet, a band comprised of New Orleans legends. Nolatet’s new album comes out April 27 on Sony Red/MRI with an American Tour to follow.

“Brian Haas paints with his fingers. In a flurry, his joyful digits add color to 88 black and white keys. He plays with the assured abandon of an artist in complete control of his craft.” – Keyboard Magazine

Mike Dillon – How many artists can claim being praised a “punk rock provocateur,” “jazz vibraphone visionary” and “percussion virtuoso” in the same sentence? There’s only one: Mike Dillon. Whether through his affiliation with artists like Les Claypool, Brave Combo and Ani DiFranco, collaborations such as Garage A Trois, The Dead Kenny Gs and Critters Buggin or bands he’s fronted, including Billy Goat and Hairy Apes BMX, the Texas-native has set his own standard for 25 years now.

“When jazz hits you in the face with a stack of bricks, Mike Dillon is there…twisting chaos into order before turning it back on itself again.” –Splinters & Candy

James Singleton – Bassist/composer/bandleader James Singleton has been a top-tier musician in New Orleans for forty years playing in the bands of Professor Longhair, Dr. John and James Booker. He has also collaborated with international artists ranging from Joe Henderson to Dizzy Gillespie, Lightnin Hopkins to Linda Rondstadt. Currently he spends most of his energy composing, playing, and touring with his great friends in NOLATET and numerous other projects.

Safety:
Presenting films in this setting will ensure social distancing guidelines are adhered to while you and friends enjoy movies on the big screen. The concession stand with Tulsa’s best popcorn will be open! More on Circle Cinema safety precautions here!