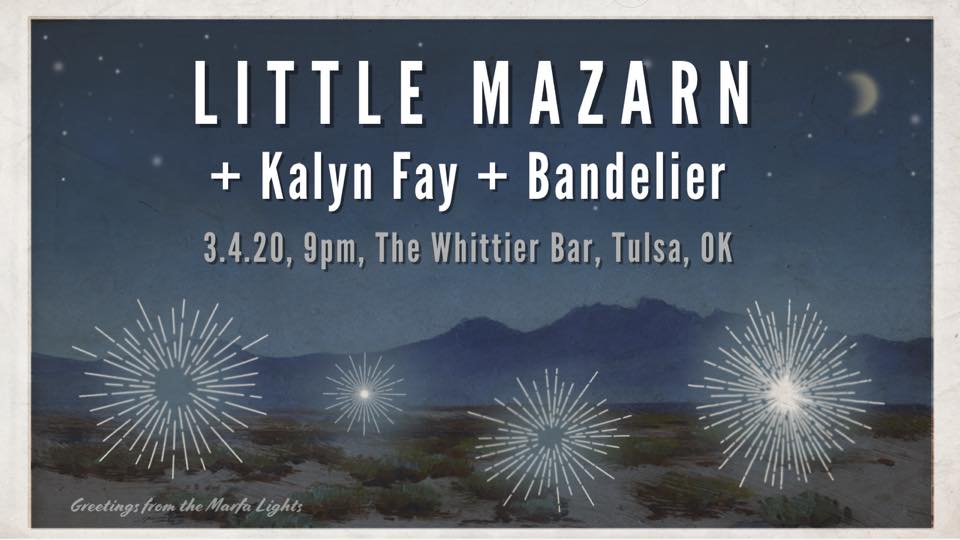 LITTLE MAZARN:
“The music of Little Mazarn is a cool float a few feet from the ground through a dimly lit, almost familiar forest. It is quieter than silence, big as everything, still but always moving. If you’ve ever had flying dreams, or an amazing night time bike ride on LSD, this might be a world for you. Chords are made up of notes; Little Mazarn gives them all their own moment. There are NO superfluous notes played here.

Lindsey’s kind and twisting voice ambles along over the spare sounds of Jeff Johnston’s saw bowing, Ralph White’s electric mbira wanderings, and her own slow banjo. Like DJ Screw, Bohren & Der Club of Gore, and anyone who chooses to walk instead of ride, Lindsey realizes the amazing power of slow… slow… slow music. Lindsey is at once a baby and a wise old man. Get in this canoe at dawn on some Texas river that remembers when Comanche slept under the stars.”

BANDELIER:
“Bandelier formed in the summer of 2010 in a warehouse in downtown Tulsa. Frontman Ryan Allen, originally hailing from Texas, spent a lifetime exploring the vast roots of American music eventually turning the pianist and composer into a full-fledged songwriter. Today, the band’s music can be traced back to those same traditions with an even stronger sense of place, especially that of the American Southwest and of their own home state of Oklahoma which lies somewhere in between the great Wild West, the folkloric Midwestern Ozarks, and the deep country-fried South. Bandelier’s songs are a reflection of where they are in the world, at the very center The Heartland, as they turn those old anthems into new cinematic soundscapes.”

KALYN FAY:
“Oklahoma-bred songwriter Kalyn Fay has a voice that commands rapt attention, whether filling a theater or piercing the din of a dive bar. It’s a tenor timbre a first-time listener once aptly described as “butterscotch,” all rich and velveteen, bold, singular.

Fay’s been writing and recording her own music for as long as she’s had a story to tell. She’s lived more than her share of life: She’s loved and lost, voraciously pursued higher education, questioned her faith, walked the line between her upbringing and her Cherokee roots, and figured out how to process and express all that through her art. She’s traveled. She’s come back home. She’s left again.

All of this is evident when she sings. Fay seems at her most comfortable when her own voice carries her story and moves it forward. Her candid lyrics reflect with a measured sorrow; they know when to say thank you, goodbye, or nothing at all. Her melodies make space for others, including an extensive collective of trusted musical collaborators from her hometown, but she will hold onto a word here and suddenly cut one off there, whenever the time is right.

When Kalyn Fay sings, you’ll hear her confessions and acceptance, vulnerability, hard-fought lessons, and measured determination. The narrative, the life lived, is hers; the warmth of her voice entrusts her story to those who will listen.”