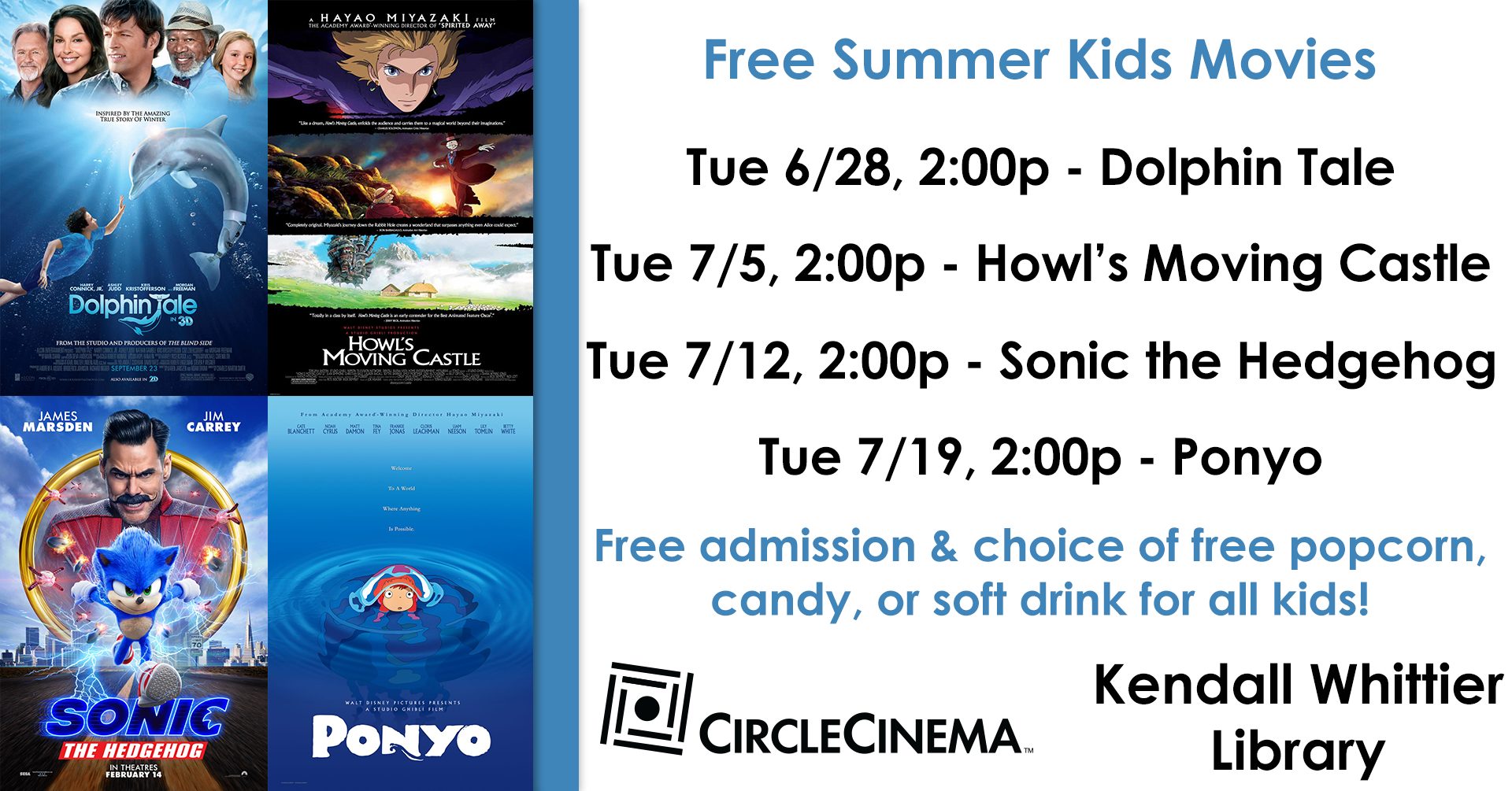 FREE weekly summer movies for kids are back at Circle Cinema in partnership with the Kendall Whittier Library. The series starts with “Dolphin Tale” at 2:00p Tuesday June 28, and continues with “Howl’s Moving Castle” at 2:00p Tuesday July 5, “Sonic the Hedgehog” at 2:00p Tuesday July 12, and “Ponyo” at 2:00p Tuesday July 19. Admission is free for everyone, and all kids will receive a free book from the Kendall Whittier Library and a coupon for a free popcorn, soft drink, or candy. Additional concession items for kids will be on sale for just $1 each.
The series is offered as a fun, inclusive indoor activity for kids, families, and groups with schools and summer programs. All films are rated G or PG, and will be played with Spanish subtitles on screen when possible. All tickets are free but seating is limited and Circle Cinema recommends arriving early to get seats and concessions before showtime. Groups of ten or more are encouraged to call Circle Cinema in advance at (918)585-3456 for best accommodations.
Tue 6/28, 2:00p: “Dolphin Tale” – PG, Drama, 113 minutes
While swimming free in the ocean, a young dolphin gets caught in a trap and severely damages her tail. Though she is rescued and transported to Clearwater Marine Hospital, her tail cannot be saved, and the prognosis is dire. What the dolphin, now named Winter, needs is a miracle. She gets that miracle in the form of a marine biologist (Harry Connick Jr.), a prosthetics designer (Morgan Freeman), and a devoted boy (Nathan Gamble), who find a way to help Winter swim again.
Tue 7/5, 2:00: “Howl’s Moving Castle” – PG, Animation / Adventure, 119 minutes
Sophie has an uneventful life at her late father’s hat shop, but all that changes when she befriends the wizard Howl, who lives in a magical flying castle. The evil Witch of Waste takes issue with their budding relationship and casts a spell on young Sophie, which ages her prematurely. Now Howl must use all his magical talents to battle the jealous hag and return Sophie to her former youth and beauty.
Tue 7/12, 2:00p: “Sonic the Hedgehog” – Adventure / Comedy, 99 minutes
Based on the global blockbuster videogame franchise from Sega, meet the world’s speediest hedgehog as he embraces his new home on Earth. In this live-action adventure comedy, Sonic and his new best friend Tom (James Marsden) team up to defend the planet from the evil genius Dr. Robotnik (Jim Carrey) and his plans for world domination. The family-friendly film also stars Tika Sumpter and Ben Schwartz as the voice of Sonic.
Tue 7/19, 2:00p: “Ponyo” – Animation / Adventure, 101 minutes
During a forbidden excursion to see the surface world, a goldfish princess encounters a human boy named Sosuke, who gives her the name Ponyo. Ponyo longs to become human, and as her friendship with Sosuke grows, she becomes more humanlike. Ponyo’s father brings her back to their ocean kingdom, but so strong is Ponyo’s wish to live on the surface that she breaks free, and in the process, spills a collection of magical elixirs that endanger Sosuke’s village.
+ Google Calendar+ Add to iCalendar