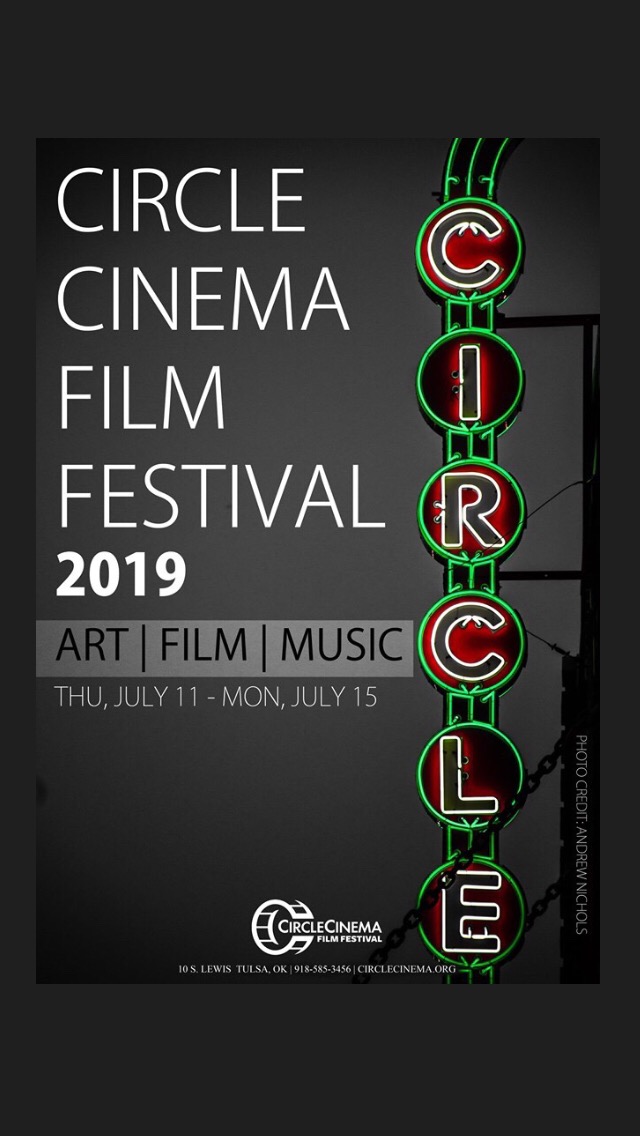 After debuting in 2018 as part of Circle Cinema’s 90th birthday celebration, the Circle Cinema Film Festival is back in 2019 with an exciting showcase of original storytelling through film, art, music and experiences. The festival brings a stellar lineup of diverse films and special guests to Tulsa, including some fresh from this year’s Sundance Film Festival and SXSW. Film programming, with an emphasis on Oklahoma-centric independent films and filmmakers, will include a mix of documentaries and features along with some classic and even silent films.

Highlights from Circle Cinema Film Festival 2019 to include:

Terlton (2019) – World premiere – Q&A with filmmaker Sterlin Harjo – A story about the power of community. In the summer of 1985, a small town in Oklahoma suffered an unimaginable tragedy; one-fourth of their community was killed in an explosion at Aerlex Corp, a local fireworks factory.

Words From A Bear (2019) – Q&A with filmmakers following film – https://www.hollywoodreporter.com/review/n-scott-momaday-words-a-bear-film-review-sundance-2019-1180556

Masked and Anonymous (2003) An evening with film and TV (Seinfeld, etc) writer Larry Charles and special screening of the film he wrote with Bob Dylan. Presented by the Bob Dylan Center.

Gray Frederickson – Walk of Fame dedication & film screening in partnership with the Oklahoma Hall of Fame.

– A seemingly monotonous weekend turns toxic for three different relationships as they converge on one fateful night, only to find broken hearts, shattered trust, and the uncertain road that lies ahead. Filmed in Oklahoma. Q&A with Tulsa writer/director Josh Downing.

American Heretics: The Politics of the Gospel (2018) (Doc) Screen 1 – Sun, July 14 2:30 PM
– Takes audiences into the buckle of Bible belt where a group of defiant Oklahomans are rising up to challenge deeply rooted fundamentalist Christian doctrine. Labeled as “heretics” for their beliefs and actions, they refuse to wield their faith as a sword sharpened by literal interpretations of the Bible. Q&A with award-winning filmmakers Jeanine Butler and Catherine Butler. Features Tulsans Bishop Carlton Pearson and Rev. Marlin Lavanhar. Filmed in Oklahoma. Presented with community partner All Souls Unitarian Church.

Kids (1995) (Feature) – Screen 1 – Fri, July 12 9:30 PM
– Directed by Tulsa native Larry Clark and written by Harmony Korine, the film depicts a day in the life of a group of teens as they travel around New York City skating, drinking, smoking and deflowering virgins.

To the Stars (2019) (Feature) – Screen 2 – Sat, July 13 5:00 PM
Under small town scrutiny, a withdrawn farmer’s daughter forges an intimate friendship with a worldly but reckless new girl in 1960s Oklahoma. Filmed in Oklahoma.

Why Can’t I Be Me? Around You (2019) (Doc) – screen 1 – Sun, July 14 12:00 PM
Follows Albuquerque inventor/tinkerer, Rusty Tidenberg’s journey with gender transition. Q&A with producer/director Harrod Blank.

Oklahoma Shorts – screen 1 – Sat, July 13 1:00 PM
Terlton (2019) (Doc) – A story about the power of community. In the summer of 1985, a small town in Oklahoma suffered an unimaginable tragedy; one-fourth of their community was killed in an explosion at Aerlex Corp, a local fireworks factory. Q&A with filmmaker Sterlin Harjo.
The Third (2019) (Doc) – Features OSU’s basketball star Lindy Waters III. For the Q&A, Waters joins Tulsa director Kyle Bell who was recently selected for the 2019 Sundance Native Filmmakers Lab.
+ Also includes an additional FIRE THIEF FILM

$5 at the door and free for Circle Cinema Film Festival badge holders.
HANSON 360, Sat, July 13 from 12-8 in gallery. A Virtual Reality experience from Tulsa’s own Steelehouse Productions. This experience ushers the viewer into the private recording studio of 3CG Records to sit right in the middle of brothers and Tulsa rock icons Isaac, Taylor, and Zac Hanson as they craft and record the strikingly beautiful not-yet-released single “Compromise”. Directed by Mark Steele for Steelehouse Productions. (FREE)
91st BIRTHDAY with CAKE on Mon, July 15 from 6:00pm – 7:00pm with Peggy Dow Helmerich.  (FREE)
Sponsors and partners confirmed as of 5-31-2019.