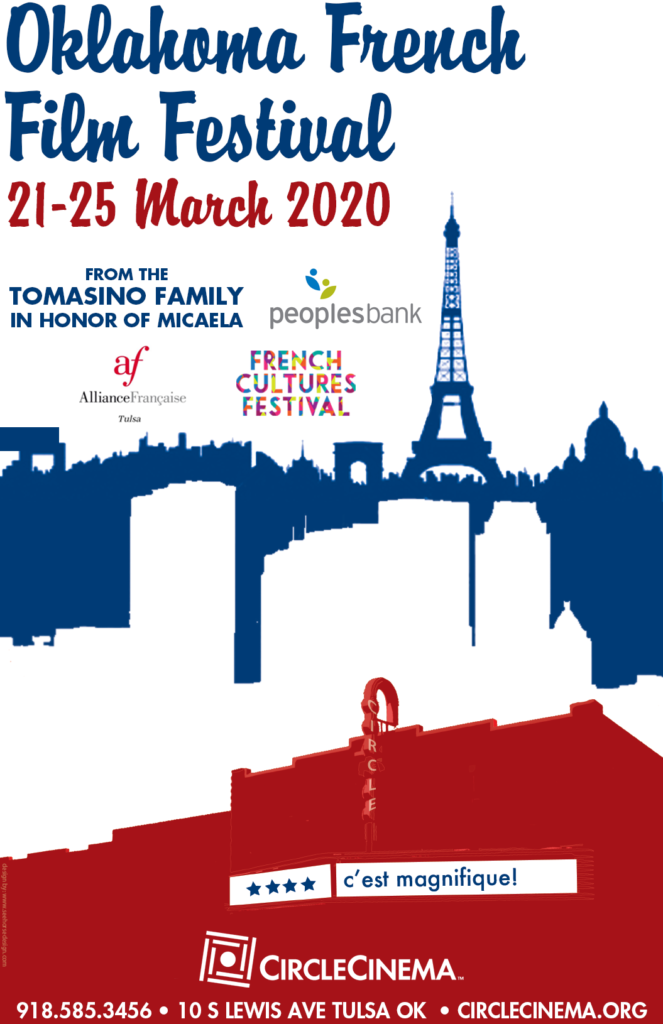 This event has been canceled.

Circle Cinema is proud to debut a new Oklahoma Film Festival celebrating French culture. They will be showcasing a  sampling from a few of France’s newest feature films and enjoying various special events that include an art opening (featuring Tulsa’s Golden Driller in France), a wine reception, a DJ spinning french music, and much more!

All films are $7 unless marked FREE, and tickets will be on sale this Friday!

Presenting sponsors are the Tomasino Family and Peoples Bank.

SUNDAY, March 22: Alliance Française de Tulsa Classique / One Film, One Federation  2:00pm Film Screening “THE INTOUCHABLES” (2011)  After he becomes a quadriplegic from a paragliding accident, an aristocrat (François Cluzet) hires a young man from the projects to be his caregiver.  4:00pm – 5:00pm Reception featuring after film apéritifs of mimosas, French 75, light bites and conversation.  5:30pm Film Screening “PAPER FLAGS” Charlie (Noémie Merlant), dreams of becoming an artist and is struggling to make ends meet. When her brother (Guillaume Gouix) returns after 12 years in prison, her life is turned upside down while he has everything to learn in a world he does not recognize. (Sponsored by Federation of Alliances Françaises USA)

MONDAY, March 23: 6:00pm – 6:45pm Art Opening/Gallery Talk: Fraispertuis City is a theme park in Jeanménil, France. Fraispertuis City Amusement Park erected a replica of Tulsa’s Golden Driller as an amusement ride, a free fall tower with four different experiences including informative panels detailing facts pertaining to the Driller, history of the black gold rush as well as Tulsa’s history. Enjoy Tulsa Historical Society photographs of a French Tulsa Driller. Tulsa County Commissioner Karen Keith and Tulsa Historical Society CEO Michelle Place will talk about the park reaching out to Tulsa, building the ‘other’ Golden Driller and visiting the ride on its opening day in June 2017.  7:00pm Film Screening “NEW BIZ IN THE HOOD”  Fred Bartel is the charismatic boss of a trendy Parisian communication agency, Happy Few. After a heated tax audit, he was forced by the administration to relocate overnight his company in La Courneuve. Fred and his team meet Samy, a young suburb who will quickly propose to teach them the rules and practices to adopt in this new environment.

TUESDAY, March 24: 6:00pm – 6:45pm Calling All Connoisseurs Wine Reception. Join Steve and Suzanne Gerkins as we experience the wines of France.  7:00pm Film Screening “WINE CALLING”  While there are more than 3,000 wine growers in France, less than 3 percent of them are working in bio, bio-dynamic or natural methods of wine production. This doc showcases some of the most exciting new French wine makers, leaders of a rising global movement calling for superior taste and sustainability.